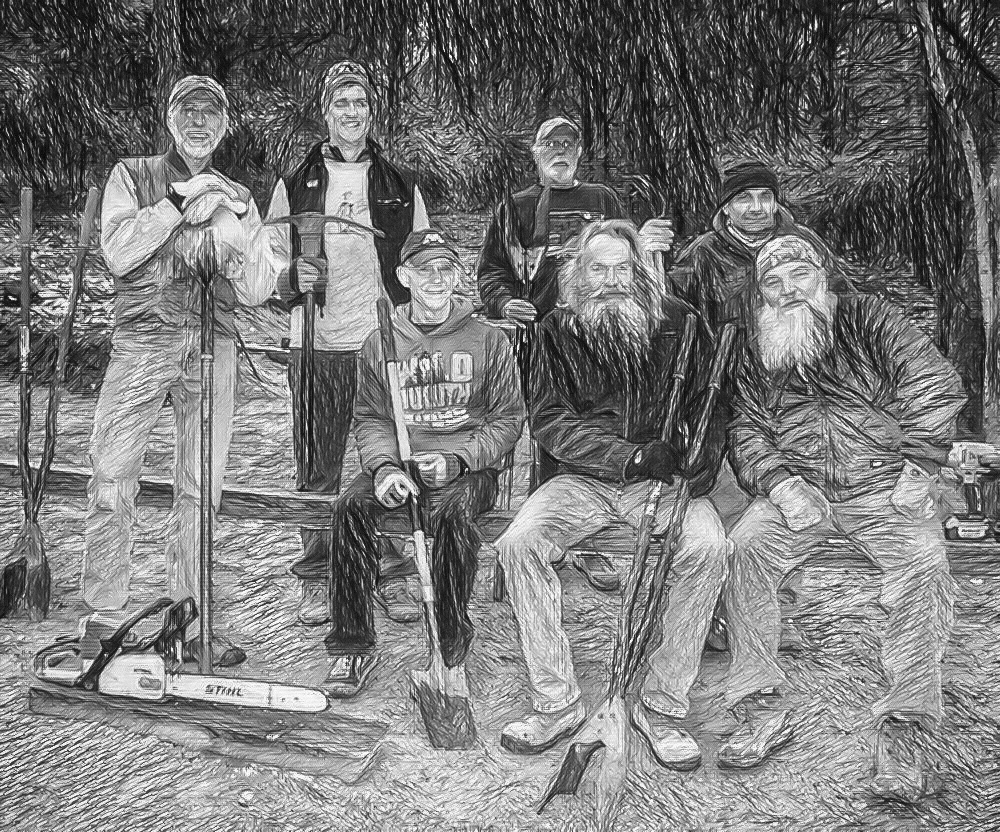 There is a new volunteer-built trail at Minnesota’s Afton State Park, and it will quite appropriately be included in the 25th edition of the Afton Trail Run 25KM / 50KM and every edition going forward. If we had it our way, we would call it Donny’s Trail or maybe Donny’s Pass, as Cottage Grove resident Don Clark was not only the visionary behind the new trail but the working foreman of a band of brothers and sisters that saw a need and with the blessing and support of Afton State Park staff, made it happen. But if you know Don, you know that won’t be the name, he’s not in it for the recognition and is the first to deflect accolades while passing the credit on to his team. Before I tell you about the trail, there are a few things you need to know about Don.

First, Don “Moxie Dog” Clark is a trail person with a huge and selfless heart and a smile to match. He’s made some huge contributions to Minnesota trail and ultrarunning and Minnesota trails in general. Secondly, when he sees a need, he addresses it. When Larry Pederson was resurrecting the Superior 100 Mile Trail Race on the Superior Hiking Trail in Northern Minnesota, he asked Donny to be the “trail guy”, the person to take care of the course, the marking, the sweeping, even helping to do the measuring—Donny along with a couple of dedicated friends, had measured the current 103-mile course with a surveyor’s wheel, twice. When Donny realized that on that technical course, course-marking ribbons hung from tree limbs were impractical because runners instead look down to where their feet meet countless roots and rocks, he developed a new system, one that some iteration of is used nearly everywhere today. Donny’s system involved straightening coat hangers and adding reflective ribbons to them, and today it’s hard to find a race that puts ribbons or flags where runners have to look up to find them. You might not know Don, but you know his trails and markings.

Don’s love of Afton State Park began around the time that he participated in the inaugural Afton 50KM Trail Race in 1994 – he went on to finish the 31 mile race eleven times! Just as he did with the Superior Tail Races and Zumbro Trail Races, Don helped to design, create and measure the current Afton Trail Run race course. Just as he was an important person to Larry with the Superior Fall Race, Rick Lindquist and then Gretchen and Mike Perbix at the Superior Spring race, he was also close with Scott Wagner, previous Afton race director, and Don was always very involved with the race—marking, sweeping, running, helping and so on. All of the aforementioned races are now directed by John Storkamp / Rocksteady Running, and while leadership has changed over the years, Don remains one of the constants that helps to keep Minnesota trail and ultrarunning cohesive. These special places and special races are an integral part of who Donny is and he in turn has worked tirelessly to leave a positive impact on them.

As Don honed his trail maintenance and building skills over the years as a section maintainer on the Superior Hiking Trail in Northern Minnesota, he continually noticed a couple things about the Campground Hill trail when he was back down at Afton. He noticed it had fallen into disrepair, something that happens on trails with steep hills—water often tends to work against them and erode them. He also noticed families struggling up the steep hill. He knew there had to be a better way, especially for people carrying kids and camping gear – perhaps on their first ever hike-in-camping trip as opposed to car-camping which is much more common in most of our state parks. Don approached the park about committing himself and his core team to a long-term project of rerouting and building the new trail. Don says: “This started about July 14th, 2014, at noon when I said, ‘I do’ and married this project. For the next 3-4 years we were inseparable for most weekends and all holidays. We danced, we sang, we played many instruments, the shovel, the pick, the hoe, the rake, and voila, we made wonderful music.”

Remember that smile of Donny’s that I mentioned earlier? It came in handy as he recruited those friends and fellow runners to help on the project. He soon found some willing and regular accomplices in Maynard Lagace, Greg Allen, Gary Sheets, Dan Mattimiro, Bill Gengler and Steven Sjolund, his core crew. Donny also worked the Afton Trail Run packet pickup area, gathering names and emails and phone numbers on his notebook, telling people about the project, asking them to show up and help out when they could. Soon, we’d get emails from Donny, saying: “I have camped, snowshoed, hiked, run, romanced, picked berries with my grandchildren and have had countless memories at the park, that I want to GIVE BACK to the park. I am offering you all the opportunity to share in this feast of fun/work. I will supply most of the tools as needed as we go along. All that you’ll need to bring is snot rag, gloves, boots, whatever you drink, and a whole bunch of sweat equity. This is simply an act of kindness that will be repaid to you many times over with sunshine and good feeling in your heart.”

Don says that he wanted to slowly move mountains with his friends, and he provided the tools and the excitement to do it (and if you’ve ever seen Donny on trail, say when he’s cheering runners on at the top of the Superior 100 mile race’s Split Rock climb or sending them into the night at the Finland aid station, you know the contagious power of his excitement). Who wouldn’t want to come to that party? Don and his friends worked on that trail every Monday and Saturday (and sometimes other days) each spring, summer and fall. He provided his own tools and the work was done by hand. 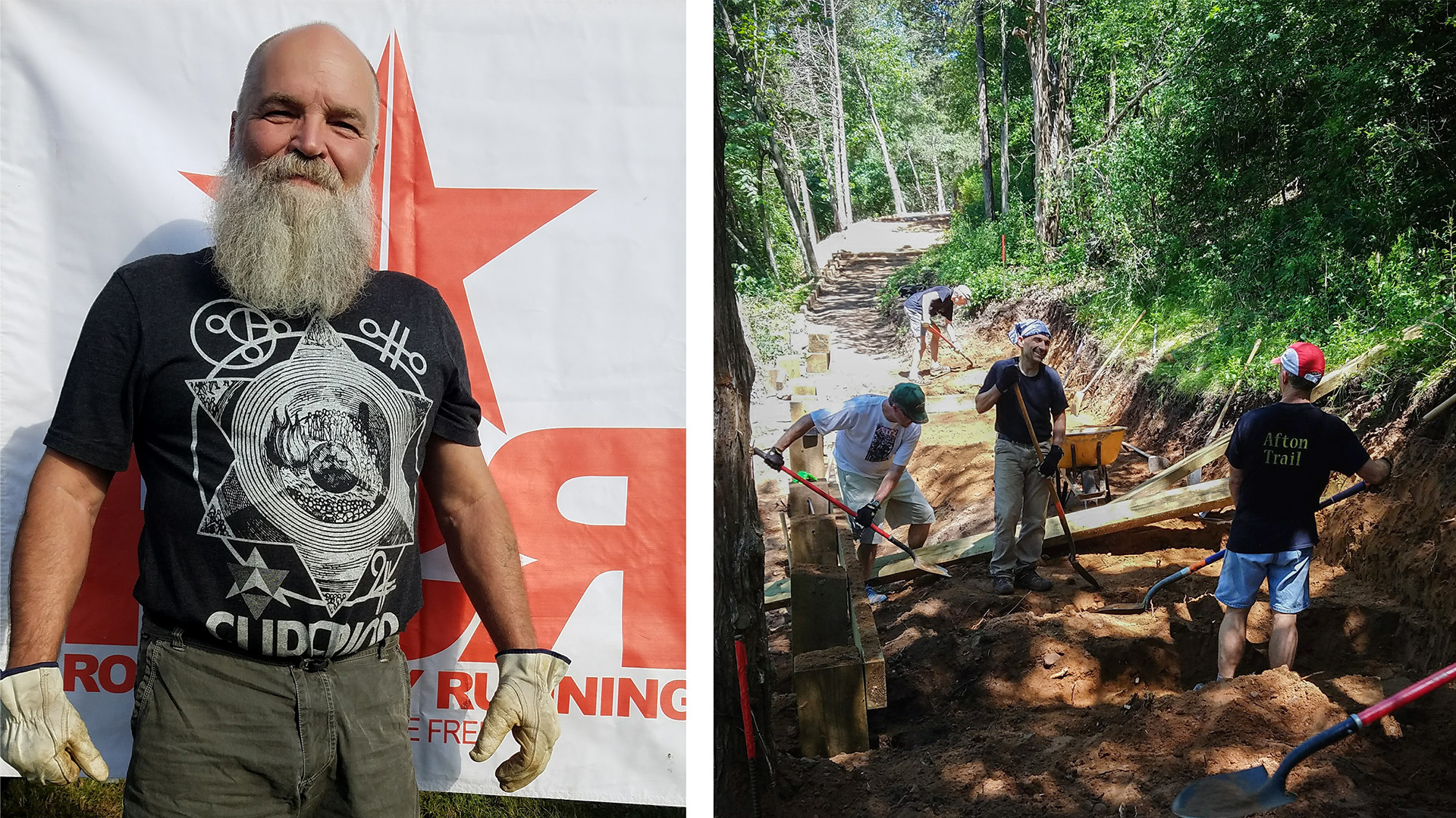 Before it was finished, Afton State Park Manager Gene Groebner, wrote in an update: “The entire length of the new trail will be around 1200’. Don has broken this into sections, and has detailed plans for each section. He routinely comes to the park on Mondays with a regular crew of two or three others. The work they are doing is based on a number of recognized sources and standards. Much of the work is back breaking hard labor, with minimal assistance from park staff with equipment and time. This summer when we had two rainfalls in a week that exceeded 12” most of the park trails received significant damage. The section of trail that Don’s crew had completed looked like it did prior to the rain. The reduction in erosion and maintenance requirements will benefit the environment tremendously.”

For those that were fortunate enough to make it to any of the work days you know that payment came around midday in the form of a 32oz Gatorade, this in addition to Donny’s requisite and near constant refrain of “You guys are aawwweeeesome!” which is also coincidently Donny’s first choice for the name of the trail… “the Awsum Trail!” Now that the this “Awsum Trail” is finished, the park has a cart-friendly, super-wide trail with a switchback instead of a steep eroding, unsustainable and unmaintainable climb. It makes the rest of the park more accessible for families and especially for kids- as we want to do everything we can to get them hooked on these wonderful and wild places for life. It’s a part of the race course, as it should be, because Don is a part of the race, an integral member of the trail running community, a trail guy who sees a need and gathers what resources he can to fill that need. Don and his band of brothers and sisters act of kindness and sweat equity is now repaid to all of us with what he calls “sunshine and good feeling in our hearts”, which I fully expect you will feel whether you are walking up the new campground hill trail for a weekend of camping or bombing down it during the Afton Trail Run.

As of 2018 the Afton Trail Run has donated nearly $60,000 to Afton State Park – additionally, its leadership, volunteers and runners have donated thousands of volunteer hours to make the park a better place for all park users.

Kevin Langton is a trail runner, trail person and freelance writer who lives in Mankato Minnesota. 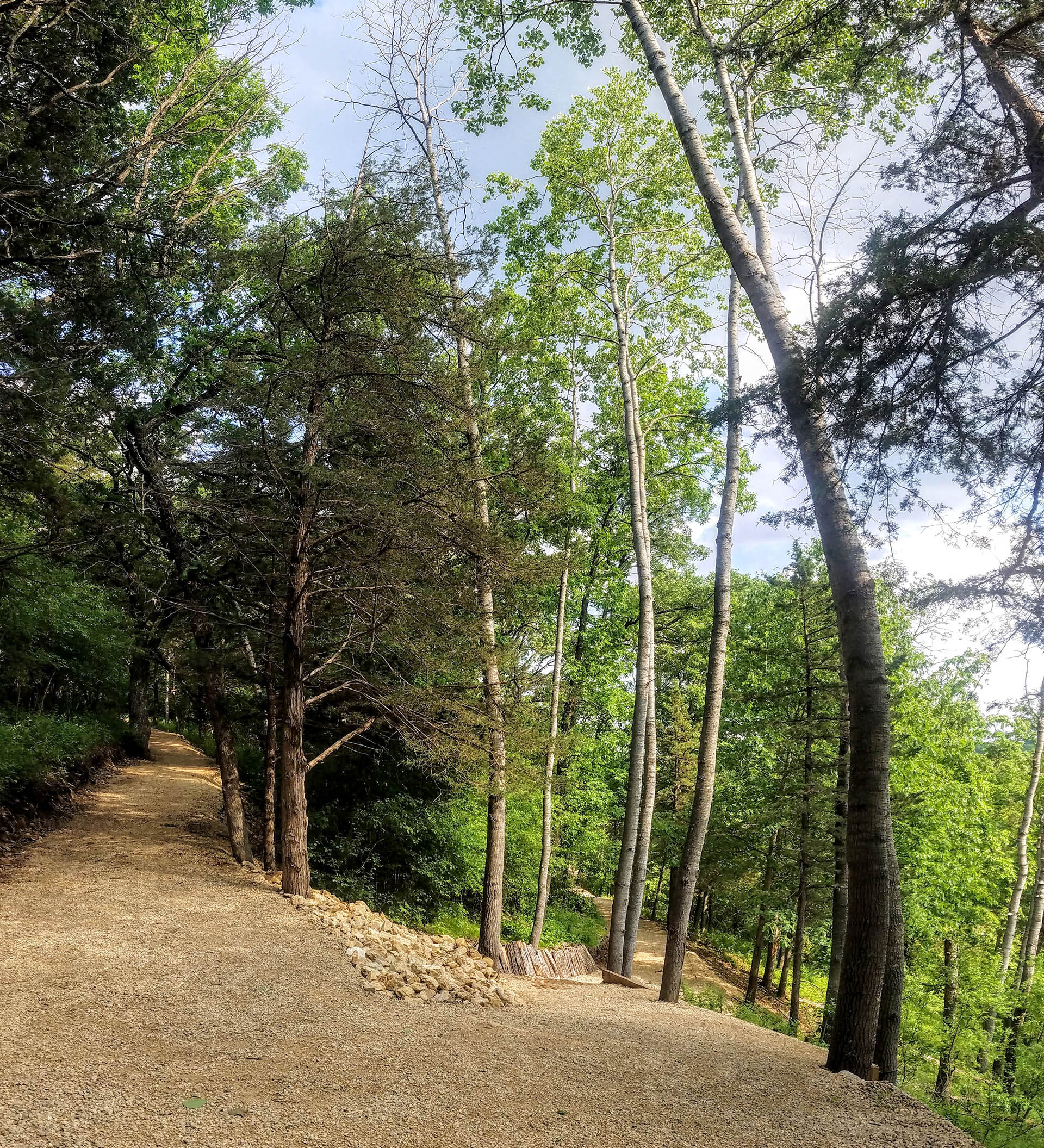