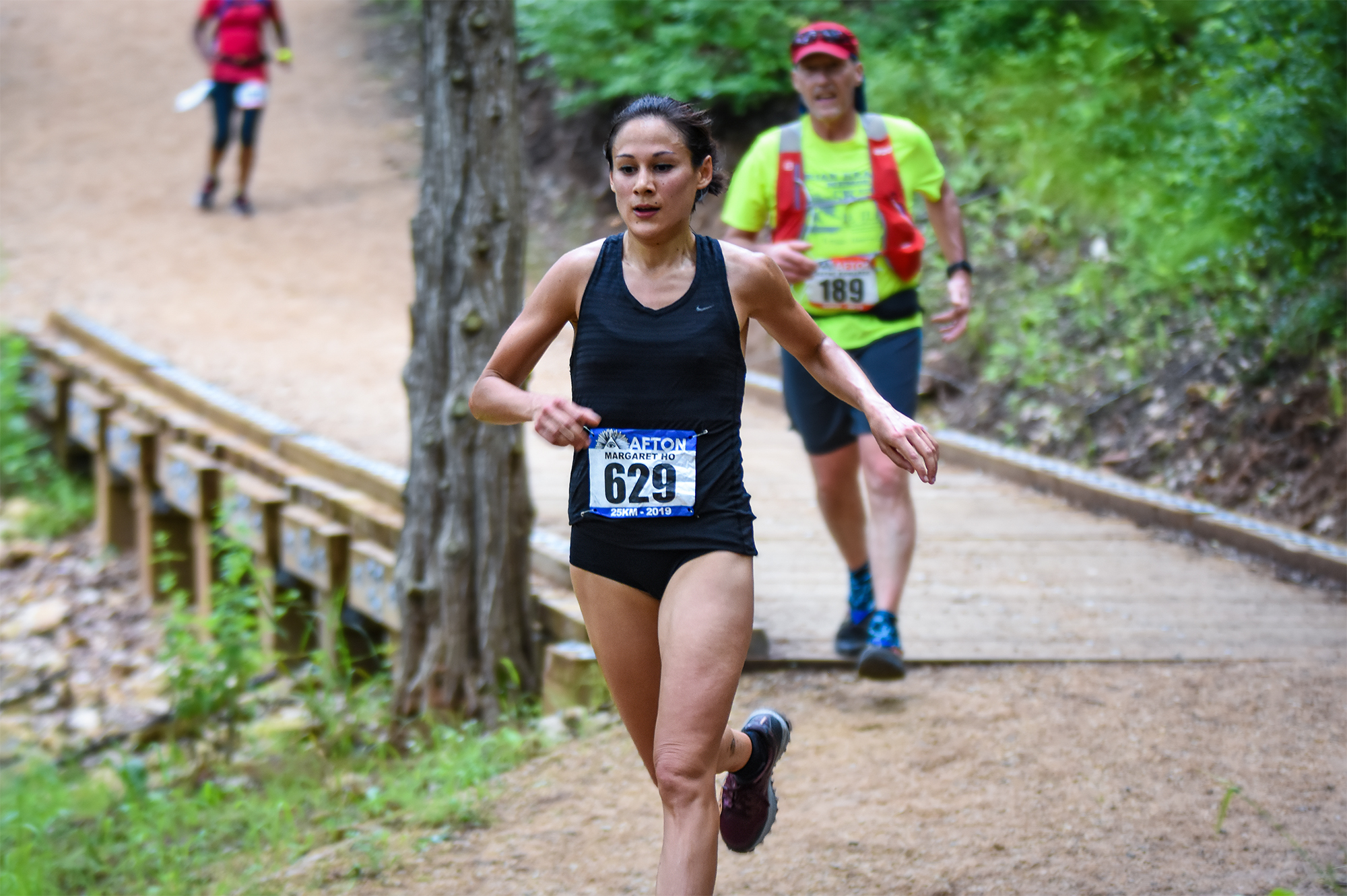 KL: Hi Margaret. Congrats on your smoking fast win at Afton (Margaret won the women’s race by nearly eighteen minutes, in 1:52:52 for the fourth fastest time ever run on that course). Can you tell us a little about yourself?

MH: I started running in ninth grade cross country and ran cross country throughout high school and college. Track was not my thing though—I did my first marathon at 19 rather than do track! I started running trails when I moved to La Crosse about 3 years ago and discovered the amazing trail network and running community here. Outside of running, my background is in social work. I currently work as a Career Coach at Western Technical College, helping adults overcome barriers to gain a college education and improve their economic status. I also volunteer with the River City Running Club and put together the monthly newsletter. Fun fact—my parents and twin sister run marathons, and I have another sister training for her first marathon!

MH: This was my first trail race of the summer, so I was excited to get out there and run fast on new trails!! It was also my first RockSteady Running event that I was able to truly race. I started the spring Superior 50K last year but was injured so only did the first half as a training run, and I’ve paced at the Superior 100, so it was about time! I went in to the race with the hope that my time would reflect a strong summer of training—aiming for a win. You never know what competition will look like though. I took it out fast to see how the field would shake out. I had to adjust my strategy throughout. I underestimated those hills! It became about surviving the hills and gaining momentum on the flats and downhills. It was also fun running past the 50K runners and getting a boost from receiving so much encouragement from them! And trying to give it back, although I’m not sure I was coherent.

KL: I was one of those 50k runners you passed—you looked strong and focused when you came by me just after the last aid station. How did that last section go? Were you thinking about time or place at that point?

MH: The last section was rough! I was getting pretty dehydrated and had to take a few walk breaks on some of those last hills. That was my type of trail though—wooded, shady, single track—so that was a nice mental change of pace. I wasn’t thinking too much about time or place. I actually don’t wear a watch when I race and go completely by feel. It felt fast, but I like not knowing my time. The clock at the finish is a surprise, for better or worse. If better, then that’s awesome! If worse, then at least I know I gave it my full effort for my current fitness level. I knew that I was in a good position place-wise. I didn’t know how far back the competition was, but I knew that I could maintain a good pace for the last section. My coach was also near the finish and gave my some nice encouragement to “run faster” so that got a little bit of a kick out of me at the end!

KL: What best prepared you for such a race?

MH: My coach is Jake Hegge with Trail Transformation, so all of the workouts that he gives me that I wouldn’t otherwise do—i.e. hill repeats—got me ready! The other huge factor is strength training. I’ve never been big on strength training, but I knew that I needed to start doing it to get to the next level. Trail Transformation also has group strength classes in La Crosse, and I started doing those in January. It’s had such a great impact on my running! I also feel pretty badass after doing a deadlift. Even if it is only 50 pounds.

KL: LaCrosse seems to have a great trail atmosphere, which makes sense with the presence of the Trail Transformation crew and some lovely trails. What are your thoughts on the trail scene there?

MH: I love La Crosse and can’t imagine myself anywhere else! The trail community welcomed me with open arms when I first moved here. In my very first week, I went to the River City Running Club’s Wednesday night trail run and met some wonderful friends through that. Exploring the Hixon trails that first fall in La Crosse and running the Hixon 25K for my first trail race, I knew it was something special. The trail scene has only gotten bigger and better since then. There’s usually a solid crew heading out for a few hours of trail running before the sunrise every weekend! The Outdoor Recreation Alliance is working on some very exciting things for the trails in the future with expanding the trail network. We all want to see it expand and grow, and that is evident in the number of volunteers that come out for trail maintenance work events. Not just runners, but mountain bikers, cross country skiiers, hikers, all who enjoy the trails. The trails are for everyone!

MH: Mental training through meditation and mindfulness. They say that running is 90% mental—well I’m not sure I agree completely with that percentage, but a lot of it is mental! I’ve been doing a lot of self-education with resources like Jon Kabat-Zinn’s books Full Catastrophe Living and Wherever You Go, There You Are, and other sports psychology books like Peak Performance. Mental reframing and positive self-talk have helped me get to a new level and treat each moment in a race as an opportunity to choose how I want it to go.

MH: I had a few low points. Most were at an elevation of about 700 feet, then climbing to 950. I’ve learned to appreciate hills! The mental reframing and positive self-talk that I previously mentioned were the most helpful. I’ve done the hard workouts, I’ve done the strength training, I know I can get up the hills, I just have to remind myself of that. Gratitude also helps me through the low points. In the midst of the pain, slow down for a minute if I need to, take a few deep breaths, enjoy the scenery, and cheer on other runners!

MH: What is your favorite holiday?

My sisters and I have our own holiday called “La Fete du Chocolat” – The Chocolate Party. This year will be the 16th anniversary. We pick a theme every year and make chocolate recipes accordance to the theme. We play games, watch movies, and eat tons of chocolate. My favorite recipe was from our 2012 theme “Chocopocalypse,” in homage to the predicted 2012 apocalypse. The recipe was a “7 Deadly Sins Trifle,” with layers of dark chocolate pudding, dark chocolate chip brownies, whipped cream, caramelized pretzels, and crumbled cookies/candies of choice (oreos, M&Ms), served in a chocolate chip shortbread cookie cup. I usually try to do a long run that day. La Fete du Chocolat should be a worldwide holiday!

KL: Wow! That sounds chocolately! And amazing. Thanks again. Congrats on an amazing race. And good luck at Voyageur.