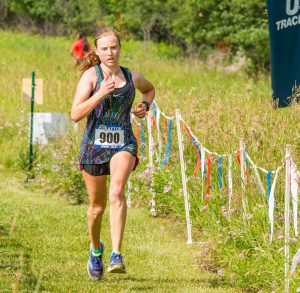 JS – Anna, congratulations on your first Afton 25K win!  For only being 20 years old, you already have some history with this race, this being your 5th finish – did you think you could / would win the race someday!?

AF – Thank you so much! My first year running here at Afton I was just hoping to finish because I had never run that far before. The next few years I started to get more competitive and try to beat my times from the previous years. I had hoped that I would be able to win it someday, but I honestly didn’t think it would be this year because I have been struggling with injuries for the past year and a half.

JS – How were you first introduced to the Afton Trail Run?  I am assuming you were running high school track and cross when you first ran the race?

AF – My mom is the one who found out about the race and introduced me to it. She’s been doing it with me ever since. I think I was entering my sophomore year at Wayzata High School my first year and I saw it as a great way to get a fun long run in as training for my cross country season.

AF – Yes!! I definitely want to try the 50K! I probably won’t get to try it until after I am done competing in college, but I’m looking forward to it.

JS – The race ended up fairly close… were you in the lead the entire way or did it change hands a couple of times?

AF – I went to the lead early, but I could tell Jillian and Cassie were catching me at times.

JS – Would you be surprised if I told you that your time was the 5th fastest ever for the modern day 25K course?

AF – Yes, that does surprise me! While I was racing I was feeling good so I hoped that it would be faster than my previous best time on the course, but I didn’t realize that it would rank that high overall.

JS – Are you running in college?  If so, tell us where and how is it going?

I am running in college. I competed for West Virginia University for my freshman and sophomore years, but I am transferring and will be competing for Montana State in the fall! I’ve had some highs and lows with college running. My freshman year in cross country I set a PR and was able to compete at the Big 12 and regional meets, but after that I began to struggle with stress reactions and a torn labrum and redshirted in track and cross country. This past track season I finally started returning to health and am excited to be getting some consistent summer training in and for what’s ahead at MSU!

JS – Anything else stick out for you from this years race or Afton in general?

AF – I actually almost didn’t run it this year because of my hip. It had started hurting again and I was concerned that I had another stress reaction or fracture. I got an MRI and received the results (no stress injury thankfully) right before registration closed. I kept an eye on the number of entries remaining and registered on the very last day, and I am so glad I was able to do it. Afton has always been one of my favorites and this year was no exception. Afton State Park is such a beautiful location for it, and the volunteers along the way are so supportive and really help you through the toughest parts. I love all the unique artwork as well; whenever I wear the race t-shirts people always comment on them. Thank you so much for putting it on and to all the volunteers who make it possible!

JS – Thanks Anna, we look forward to seeing you back next year for your 6th Afton Trail Run!