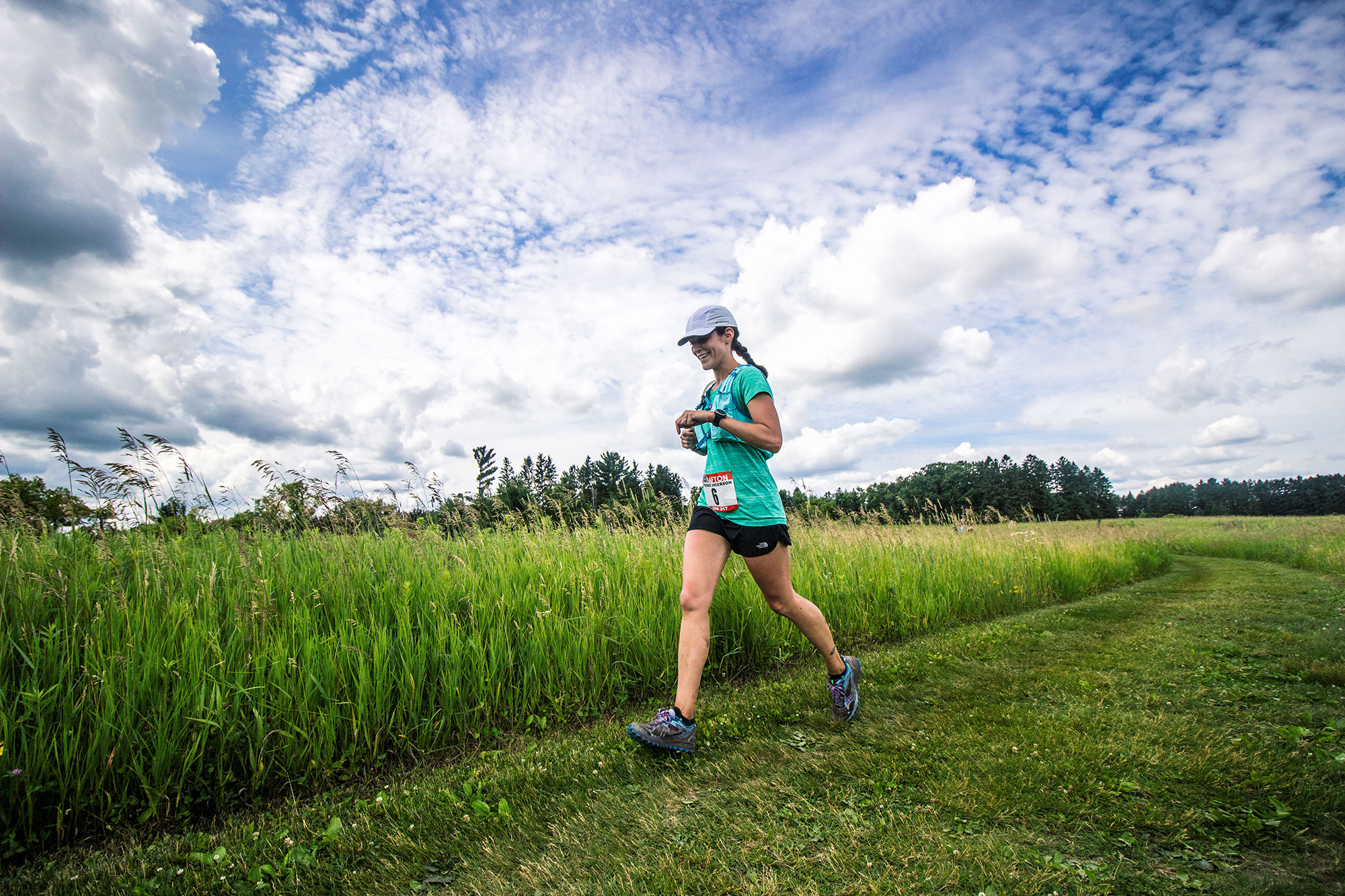 There is a guarantee of no blizzards this year for the 25th Annual Afton Trail Run. In a world of races that constantly pop up and disappear, 25 years is a long time and a birthday worth celebrating. Afton was conceived in 1994 By Terry Stockton, Pam Albin and Mary Croft after a fatass style run was hosted by Pam Albin and Mary Croft at Afton State Park in 1992 and 1993. Terry Stockton was the first race director. John Storkamp who was born, raised and still lives just down the road in Hastings took this race over from his friend and previous race director, Scott Wagner, in 2008 and many of the key volunteers (friends) from those days are still with the race today.

Creator of the modern course, and longtime friend of the race, racer, course marker and sweeper (perhaps we should call him Mr. Afton), Don Clark, with an ever-changing and growing team of volunteers, just completed the new Campground Hill Trail, which will be featured in the race. It is nominally longer than the old section of trail but may run faster than the old campground hill for many runners due to a more forgiving downhill gradient.

The race sold out yet again this year, with 950 runners, the largest field limit to date—making it one of the largest trail races in the country. That said, the many sections of double-track trail keep the race from feeling “big” and the familiar army of long-time trail/ultrarunning volunteers always make it feel like old-home week. Afton Trail Run is closing in on $60,000 in lifetime donations to the state park and annually donates 100’s of volunteer hours maintaining trails and clearing buckthorn.

The headline; Eve Rukavina-Rembleski is back! After a several year ATR hiatus, the winningest all time female 50K runner (6 wins, tied with the winningest male 50K runner, Charlie Hubbard) is back on the Afton trails. Eve holds the Open and Masters course records and now that she is 50, she’s likely thinking about the Grand Masters record held by legendary ultrarunner Ann Heaslett. Eve could also figure into the overall race but would have to contend with many younger runners, albeit none with the experience or pedigree of Eve, and if the past is any indication she will come prepared. Eve has the 5 fastest times on the modern day 50KM course with her 2011 time being an outlier as that was the year we had to run the race at Afton Alps due to the government shutdown—she likely would have had another top time that year giving her the six fastest times in the 50K (Fun historical fact: in 2006 Eve’s husband, Duke, won the 50K, Eve was second to Duke by less than two minutes and current race director John Storkamp placed third). Lauren Mitchell is no stranger to the podium so one would assume she is out for the win. Lisa Dunnigan clocked a 4:38 back in 2016 at the Afton Trail Run and I would imagine that in order to win, someone is going to have to run at least that.

On the men’s side, there looks to be a handful of possible low 4 hour competitors but a dark horse could possibly appear out of the “unranked”/ virgin ultrarunners from further down the Ultrasignup list or from one of the few faster runners with ATR specific experience. On paper Dustin Meeker from Maryland looks to be the favorite and Dmitri Drekonja has seen the podium before. It could be a fast year for old men, with lots of top ranked runners in the Masters and Grand Masters categories. Of the ten top ranked runners, only 3 have finished Afton before, but after the first loop they’ll all know what to expect.

Of note, Herb Byun, Joseph Galloway and Michael Scandrett are all going for their Afton 50K finish number 16. Wally Goettl, and Les Martisko are going for finish 15 and Mark Stodghill for 13. Notable is that Herb and Les are both 74 years young. Both Les Martisko and Mark Stodghill have completed over 400 marathons and ultras each in their lifetime. Wow! Kevin Chem’s “youngest finisher” record from 2014 at the age of 15 could be threatened by Andrew Lewis, who is 14 years old.

As is often the case at Afton, the 25K looks to be where the speedy action is once again. The 25K is again playing host to this year’s USATF Minnesota Association Trail Championship. On the women’s side, Manuela Knispel and Thea Fleming have four Afton 25K finishes between them and three wins, but that was quite a few years ago now. But experience counts when you’re running only one loop. Candice Schneider, not showing much experience for trail/ultra finishes, is a quick competitor and no stranger to placing well and winning races on the roads, and Afton has proven to be a good crossover race over the years.

On the men’s side, reigning Master’s course record holder Kurt Keiser will be looking for the Master’s title, but is more than capable of running with the younger kids as well. But it will be tough to get around Ryan Becker, who ran a blazing 1:38:18 for second place in 2016, the 8th fastest time on the modern day course, which, given the type of talent that ATR 25K has garnered in the past, is freaking stellar. Steven Babcock has a pair of 1:45’s—if he can repeat that this year he should place pretty high. Spending more of his time on roads (and often winning tougher and hillier road races) Ben Schneider could be a dark horse in this years race—he and the aformentioned Candice Schneider are married (fun fact: Ben Schneider won the historic Paavo Nurmi marathon an astonishing 10 times in a row, while wife Candice won five in a row!) Speaking of dark horses, there is a whole army of runners unranked by UltraSignup and even more than in the 50K, so a men’s or women’s winner could emerge from here as Afton has often times been the crossover race for many “local champion” road racers.

Both the women’s Master’s and Grand Master’s champions are running along with the Men’s masters champion. Amazingly Jan Guenther owns the top 6 fastest times for a Grand Master woman at the Afton 25K, and of course she is racing again this year!

Once again looking for “number of finish” milestones this year, most notably again Bennett Henderson, not only because he is looking for the highest number of those running this year, but because at the young age of 28 he already has 11 finishes to his name, racing for his first time back in 2007 at the age of 17. If Paul Jensen finishes this year he will be alone as the oldest ever finisher of the 25KM race at 74.

Your final tip for success at this year’s race is to hydrate and carry liquids. It’s Afton. It will be hot out there. It rarely cools down as the day goes on, so that second loop heats up. Be ready for it by coming into this thing fully hydrated and carrying something to drink. And your final-final tip is to have fun out there—that’s what this is all about, so smile a lot and give your teeth a nice even tan.