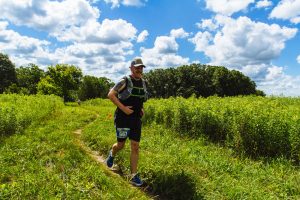 Afton, the St. Croix River, Minnesota, Summer, 4th of July week and the Afton Trail Run conjure images of lush green humid valleys, bluebird days, clouds of mosquitoes and black flies, American flags, hot weather, barbecues and one of Minnesota’s oldest, largest, most competitive and paradoxically chilled out races.  Leading into this, the 24th Annual Afton Trail Run, we have already run a ton of miles out at Afton this year and we have performed about 150 hours of trail work to boot (take special note of how brush free most of the snowshoe loop and some of the Back 40 Loop are – it was a lot of work).  Our friends at the state park have a few hundred additional hours of extra work getting ready to host one of the busiest days that the state park sees all year.  Beyond the love of the park and the sweat equity that Afton Trail Run volunteers put into the race and the park itself – we push ever closer to the $50,000.00 mark in lifetime donations on behalf of the race to the park, something we can all be really proud of.  To say we are excited and ready would be an understatement – come race day our crew of 150+ volunteers are going to put on the Summers best party and you are invited.

With a record field of 900 runners (and even more that wanted to get in) we have 567 registered in the 25K and 333 registered in the 50K which we believe is the second largest ultra field (in a single race distance) ever in the state of Minnesota besides the 2016 Voyageur 50 Mile race.   Runners this year hail from 26 states and three countries, 38% are women and 62% are men, the largest age demographic is 30 to 39 (accounting for 316 of the registered runners) with the second largest age group represented being 40 to 49 (accounting for 280 registrants), then it is the 50+ crew followed by the 20 – 29 group and a small representation from the under 20 group – all of this data is interesting but most importantly, we all have one thing in common, we all love running the trails at Afton State Park.

If we did not want to be measured we would not race so as is customary, lets run through some stats and predictions for this years races.

The 50K is bigger than ever and we are glad to see it, many new and enthusiastic names and faces training on the trails this year for sure, but of course, there is no shortage of return runners and old friends either.  In the men’s competitive race after the top two ranked runners (acknowledging that there could be a dark horse, somebody we overlook and that this is an ultra and anything can happen) the drop-off, is similar to the the hills at Afton, pretty steep.  Kurt Keiser won last years race clocking the 4th fastest time ever run on the course (3:44:27) – the 14 year younger Adam Doe (who has run 1:42 at the 25K before), while a much less experienced racer is just that, a racer, with a some fast and legit first place trail and ultra finishes to his credit. I think come race day, there will be some excitement, certainly this race is not a foregone conclusion.   On the women’s side it is simply amazing but really not surprising that old friend of the race, grand master runner and Midwest trail and ultra legend Ann Heaslett is ranked really high by UltraSignup and in this case, the numbers do not lie  – Ann has finished the race 6 times and has never been out of the top 6 – while we DO expect her to be rubbing elbows with the Open women, she will certainly be the one to beat in the Grand Masters division. Looking down the list there are many capable women in the race but maybe this is the year that Jayna Tomalty hoists herself onto the top step as she is rarely out of the top 5 at local trail and ultra races and has been training consistently and well this Spring and Summer.  Our youngest runners this year are Eric Heidal and Alexander Weber, both are 18 years old.  The oldest runner this year is Les Martisko at 73 (less is a member of an exclusive club of runners that has run the marathon distance or beyond 300+ times). Not far behind Les are Herb Byun 72 (only by one day since Herb turns 73 on July 2nd), Wally Goetel 71 and Greg Taylor 70 – this group is just mind blowingly awesome.  There are a good number of runners in the 50K looking to achieve significant finish milestones this year; going for their 15th finishes are Herb Byun, Joseph Galloway, Tim Potter and Michael Scandrett.  Looking for their 14th finishes are Wally Goettl and Les Martisko, 12th Mark Stodghill, 11th Steve Hagedorn, 10th Stephen Corner, Jim Stocco and Greg Taylor.  27 people in this years race have 5 or more finishes.

25K:
Registered Runners: 567, Women: 43%, Men: 67%, Yongest Runner: 10 Years Young, Oldest Runner: 73 Years Old, First Time Afton 25K Participants: 348, Returning Runners: 219
The Afton 25K will host the USATF Minnesota Association Trail Championship race again this year and with that always comes some great talent.  On the men’s side, coming off a recent Superior 25K win is last years Afton 25K winner and the Afton 25K course record holder Matthew Berens – his CR, 1:34:58 works out to be an astonishing 6:08 per mile.  Interestingly, this years Superior 50K winner (and new course record holder), Benjamin Cogger from Duluth Minnesota is also participating, in this, his first ever Afton 25K.  Similar to the 50K, the drop-off after the top two rated runners is steep but don’t be fooled, there is a crazy number (we estimate about 25) sub 3:00 marathoners that have some significant trail experience who will be chasing these top dogs – oh, and Pat Russell is in the 25K this year – he has won the Afton 50K before… do yourself a favor and Google him, look him up on Athlinks or UltraSignup, he’s got chops.  The women’s race could not be much more interesting in that Thea Flemming returns after a number of years absence having won in 2007 and 2009, but last years third place finisher and local road phenom Jillian Tholen ran a better time in her Afton 25K debut last year netting a 1:52, about 4 minutes faster than either of Thea’s wins and the 4th fastest time ever run on the course.  Bekah Metzdorff (her husband and fellow co-owner of Mill City Running mentioned in the 50K segment) won the Afton 50K in 2015 so we would expect her to be in the mix here as well as she builds up for this years Superior 100 Mile Trail Race.  Other racers like Erika Lohn and Andrea Vazac are no strangers to top 5 trail finishes and there is no reason that the Afton 25K would be an exception.  Here is an amazing fact, Gear West’s Jan Guenther owns the top 5 fastest times for a Grand Master woman at the Afton 25K, she is racing again this year.  The oldest runner this year is Paul Jensen (73) with good friend of the race and oft volunteer Tom Burr not far behind at 71.  The youngest runner is Ava Hoff, 10, who, this Spring became the youngest ever finisher of the Zumbro 17 mile race – she is an oft RSR volunteer as well and one really special kid.  Looking for “number of finish” milestones this year, most notably is Bennett Henderson, not only because he is looking for the highest number of those running this year, but because at the young age of 27 he already has 10 finishes to his name.  Local trail mainstays, Afton locals and park loyalists Pam and Loren Albin will both be looking for their 10th 25K finishes this year – Loren has 7 50K finishes as well!  44 people in this years race have 5 or more finishes.

So there it is all broken down and put back together and it is nearly race day, so we say – bring on the lush valleys, the steep climbs, the biting and stinging insects, the american flag (sports bra’s, shorts, hats) – run your hearts out, rain or shine, 85% dew-points be dammed, its Summer in Minnesota, we are going to celebrate the way we always do, by running at ton of miles at one of our favorite places in the world, and of course, we will have a barbecue after.